Kew is a botanical garden in West London that features thousands of plants and trees from all over the world. Unfortunately this writer has little knowledge of botany beyond the drawings of Georgia O’Keefe and so some creative liberties have been taken. Below is a photo of the beautiful Sacker Crossing, rather than a flower that I know the name of.

In additional to what one would imagine is every flower in the world there are also several 18th century buildings that have been wonderfully maintained. This is The Orangery, constructed in 1761. Not used for its intended purpose, Kew’s Orangery is now a restaurant. The building had be designed by Sir William Chambers, who is well known for being the architect of Somerset House, located in central London.

Museum 1 of one, much like how World War 1 had been pessimistically titled before the second Museum No.1 is the first and only museum in the gardens (other buildings are galleries or greenhouses). Designed by Decimus Burton and constructed in 1857, Museum No.1 is recently restored Georgian building that would make a luxurious stately home. One can find this wonderful building opposite the Palm House over the koi pond.

This is how we transition to the true focus of Kew Gardens, which is the wildlife and flora. The Hive is modern art sculpture designed by the artist Wolfgang Buttress to provide some insight into the importance of bees. Surrounding the sculpture is every species of wildflower, a well known favorite of bees (I guess), so that when walking around the hive one can touch and smell around the flowers, report back to the hive and then be off to ruin a picnic, just like a real bee. 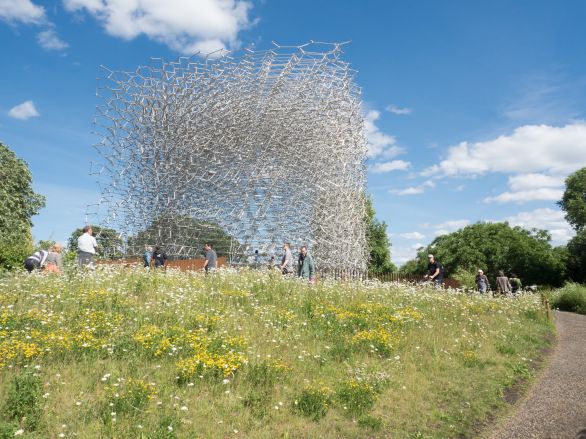 Inside the hive, looking towards the sky

The flowers of Kew are the main event. The buildings and the artwork are great distractions but the main event really is the flowers. Below is a yellow and white flower, using the same green bit underneath as other flowers the yellow and white flower imitates a sunny-side-up egg by attracting breakfast-loving plants into it’s yoke for mating. I would like to apologise for any vulgar language but flowers are living beings like most of us and so mating is everything. Please do not get the wrong idea though, Kew Gardens is a family place, the flowers do wait for night before engaging in amorous activities and so the gardens are always closed by sunset. The horny clandestine buggers.

There are loads of bloody flowers. The ones below contain bees as whilst the wildflowers were available near The Hive, bees are worldly creatures who will sample all of life’s delicacies. Below are the curry and the sushi of the bee society, exotic foods from far off lands butchered to become acceptable to the local population.

The gardens are full of wildlife, there are obviously insects common to England but there are also Peacocks left to roam in the wild. They are not common though, we had walked all day before finding one and when we did there were plenty other people surrounding it trying to get selfies.

As a final note, I’ll sign off with a photo of a red, white and yellow flower, almost certainly the result of mating between the yellow and white flower above and the bee’s sushi. Some liberties have been taken with regards to facts relating to the flowers to supplement the authors knowledge, please bear with me.